Zurich University of the Arts (ZHdK) and Connecting Spaces Hong Kong – Zurich is proud to present “The Painter of Modern Life” – a solo exhibition by Hong Kong artist Frank Tang, presenting the artist’s reflections and responses to the first 3 months of his artistic residency in Zurich.

During this time, Tang has lived as an urban observer, engaging in understanding, interacting with, and portraying the city, while simultaneously attempting to remain a detached observer. “The Painter of Modern Life” is a summary of the artist’s active participation in and fascination with city life. The exhibition at the same time displays a critical attitude towards the uniformity and speed of life in a modern city, calling into question the individual’s relationship with nature. 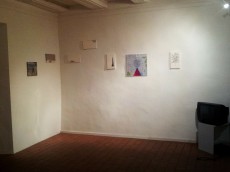 Before Tang managed to look at Zurich in person, he learned about the city by reading its map. Deeply impressed, he realized that reading such a map could quickly influence a visitor’s impression of a place . For his piece impression mapping, Tang recorded small details of things such as trees, lakes, and old building tops he encountered. To the artist, these tiny little things witnessed the history and the development of the city, and they together formed the artist’s experience in a city completely new to him.

In his paintings depicting the landscapes and trees of Zurich, Tang tends give prominence to the main subject, leaving the backgrounds entirely blank. The structural composition, method of expression, as well as the very absence of content, however, create rhythm and variety. This technique can be seen in the Clouds series, in which the variety and balance created is further enriched through the use of video projection and by the imagination of the viewers. Apart from this, Tang has also employed an abstract style to describe his visual experience in the city. In his video work X:Y, Tang filmed the plain blue sky over Zurich, where planes leave their white lines in the air. The sky seems to lose its colour gradation and dimensions in the video. Viewers’ perceptions are also distorted by the juxtaposition of the video screens.

Through the various traces of the cityscape shown in this exhibition, the artist wishes to reflect the relationship between humans and nature, a relationship that is no longer so present in our daily lives.

Frank Tang Kai-yiu is a Hong Kong-based artist whose artworks look into the performative elements of Chinese painting. An emerging artist, Tang received his Bachelor of Visual Arts(Hons) from Hong Kong Baptist University in 2010. In 2012, he won the Louis Mak Chinese Painting Award, as well as the Grant Award from Muses Foundation for Culture and Education Limited. During his studies his works were well-recognized, winning the Yau Sang Cheong Chinese painting Award of AVA in 2009, and an AVA Award in SOLOS Graduation Show 2010. His artworks have been exhibited in art organizations and galleries in Germany, Hong Kong, Shenzhen, and Taiwan.

Tang’s works are provocative to human thoughts, senses and behaviour. As a process-oriented artist he is confident that the actual experience weighs more than the result itself. Through the medium of video, Tang captures the process of art-making, which he believes to be an experience including senses, thinking process, action and reaction, and unexpected happenings. His works invoke viewers’ reflection into their daily life experience from a fresh perspective. Recently, he has been exploring the relationship between Chinese painting possibilities of showing this process on video.